November 24, 2022
I started this blog, on Blogger, exactly 15 years ago. It has been a solid platform, but not much has been happing lately. In the meantime my English writing also appeared on ... Wilfried Martens Center Blog Euractiv and Blogactiv (defunct) Medium Wszystko Co Najważniejsze (All That Matters Most ) ... and a few other places. Blogger was a place for "everyting else". And for backups of stuff that could vanish elsewhere. I am now moving it to Substack, here .
Read more 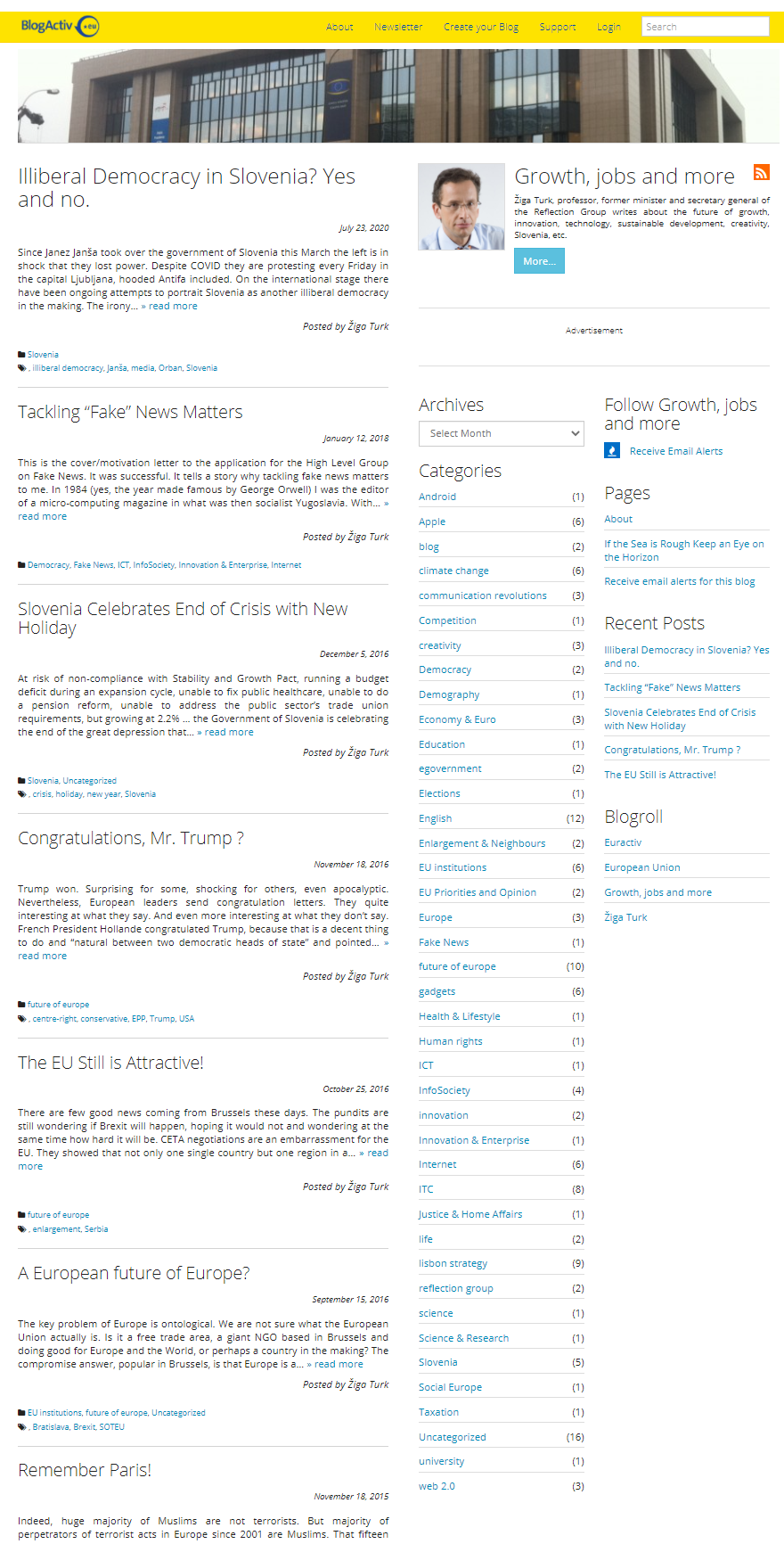 I noticed two outlets I was publishing at, the Blogactiv and the DigitalPost went 404 . Thanks to the Internet Wayback Machine and my email archive I was able to save the content and move it here - with original dates. Blogactiv (2007-2020) DigitalPost (2015-2017).
Read more

December 18, 2018
This is the cover/motivation letter to the application for the   High Level Group on Fake News . It was successful. It tells a story why tackling fake news matters to me. In 1984 (yes, the year made famous by George Orwell) I was the editor of a  micro-computing magazine  in what was then socialist Yugoslavia. With a colleague we traveled by train to London to a computer fair. Crossing the western border included a long wait, inspection, payment of a hefty tax and dealing with rude police and customs officials. We were still students, young, full of optimism and we were dreaming up plans how  we will, in the future, get rid of borders using telecommunication equipment , electronically connect to the computers on the other side, get some data, process it at home, and sell the service abroad. No stupid Yugoslav customs official, no borders would stand in our way. Ten years later I was able to do just that. I crawled the sites which at that time enabled the downloading of legal, freely
Read more

October 05, 2017
Nowadays, the main issue are not monopolies, not pricing levels. The issue is free and open space for innovation and the exchange of ideas. A law on internet content neutrality would ensure it.   The previous battle in the  war for a free and open Internet  was about  net neutrality  — equal access for all to the plumbing level of the Internet. The next battle is about  content neutrality  — equal access for all to the content level of the internet. Content neutrality is more important than net neutrality. It is not about what speed is available to what service but about what voices are heard and what are suppressed. It should be made into a law. Net Neutrality I was one of those ministers in charge of information society that pushed hard for enshrining net neutrality into Slovenian law and into EU directives. We had some success. While the net neutrality hardliners would not be entirely satisfied, provisions have been made that ask for internet service providers and telecommunication
Read more

September 12, 2017
For me personally, the most enjoyable moment in that whole “fake news” commotion has been the re-discovery of the concept called truth by the progressives. Finally the pudding of post-modernism relativism was made available for eating. And it did not taste well. However, fake news and related phenomena, such as echo chambers and social bots, are a matter of concern for the entire political spectrum. Politicians and media feel challenged or even threatened by it. Some are even suggesting that in order to save democracy we need to regulate social media just like the printed press. The issue boils down to the balance between the right of free speech and the danger of false information. There is a growing tendency to make the danger look bigger and the issue of freedom of speech smaller in order to achieve balance and thereby justify more governmental control of the social media at the expense of freedom of speech. The advocates of tighter regulation of social media base their argume
Read more

Why a crackdown on fake news is a bad idea

February 09, 2017
One of the promises of the internet has been that it will bring about better democracy ( here and here , for example). Even before the web was invented, Vannevar Bush, the creator of the hypertext concept and the Memex machine expected science and information will lead to a better society ( source ). Since 1990s, when those ideas started to materialize, everybody saw that the internet is vastly increasing the access to information and the ease of connecting people. The conventional wisdom has been that better informed citizens would be making better political decisions and that the more connected people will also be forging a more tightly connected society. This would both lead to e- (for electronic) or i- (for internet) democracy. Peak eDemocracy In retrospect, it would appear that the peak eDemocracy optimism was reached in 2008 with the election of Barack Obama as the president of the United States. His was one of the first campaigns where the internet played a major, some wo
Read more
More posts